More than 370,000 tourists are estimated to travel through Sorell on their way to the east coast, the World Heritage Site of Port Arthur and Hobart each year.  Council is working hard to encourage some of these “passing through” tourists to stay a while and explore what the Municipality has to offer. Popular attractions for tourists and holiday-makers include the many walking routes and scenic drives, fine eateries and wineries, some of the most popular surf beaches in Tasmania, a wide range of arts and cultural activities, markets, historic and heritage sites and op shops.

One of Tasmania’s fastest growing Municipalities, with recent growth exceeding state averages, the Sorell Municipality has a population of approximately 16,000.

Sorell, located just 25 kilometres from Hobart in the south-east of Tasmania, is one of Tasmania’s oldest towns. It is popular for its history, beautiful southern beaches, relaxed rural lifestyle and growing suburbs.

The Municipality was established in 1862 and covers some 583 square kilometres and is characterised by rolling countryside, low forested hills and long coastlines filled with beautiful beaches.

With suburban, beachside, semi-rural or rural living options available, the Sorell Municipality continues to attract people with its affordable housing, natural coastline, rolling hills and the convenience of major shops and services all within close proximity to Hobart.

The Bream Creek Show has been held annually since 1897, making it one of Australia’s oldest country shows. Held in March, this is an event you do not want to miss. Come down to the show and enjoy rides, ringside entertainment, wood chopping, wool displays, the giant pumpkin competition and much more.

Fresh fish and seafood is the philosophy of the Dunalley Fish Market. Crayfish are cooked daily and oysters are not opened until you ask for them to be. All the produce is caught or harvested locally. The market itself is in a lovely setting by the water and offers free use of a barbecue, or purchases can be packed in insulated boxes suitable for your journey by car, boat or plane.

The Sorell Community Market has many stallholders selling a wide range of goods and welcomes hundreds of visitors each week. The market offers everything from freshly picked organic and farm-grown fruits and vegetables, antiques and collectables, second hand goods, arts and crafts, furniture, wood turning, native plants, garden products and tools.

Tasmania’s cool climate gives extra flavour to its berry fruits and cherries, which are the specialty of Sorell Fruit Farm. The range of berries is astounding – strawberries, raspberries, tayberries, boysenberries, loganberries, silvanberries, blackcurrants. From November to May at least a couple of berries are in season, ready for the whole family to pick their own. December and January are the time for picking super-sized sweet cherries.   But at different times during the warmer months you can pick apricots, nectarines, peaches, apples, pears, nashi, broad beans and sweet corn. All the fruits and vegetables can be picked at ground level. Enjoy a free self-guided tour of the diverse farm and then stop at the cafe for a Devonshire tea, gourmet lunch or berry ice cream. To take home, there is a marvelous range of the farm’s award winning liqueurs and fruit wines, jams, honeys, vinaigrettes and pickles – including pickled cherries.

Bream Creek Farmers Market is a produce based market held at the Bream Creek Show Grounds on the first Sunday of every month, showcasing growers, cooks, brewers, producers and makers, from South Eastern Tasmania and beyond.  The Market has a focus on locally grown, fresh and seasonal produce which is sold directly by the people who grow and make it.

A list of facilities in our Municipality, including playgrounds, dog parks, sporting assets, public toilets etc, is available in our searchable community facilities map: 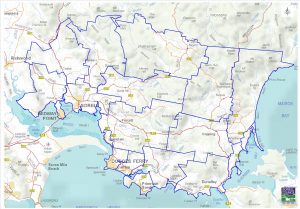 Our community is home to rolling countryside, pristine beaches and world-class wildlife. Coupled with friendly locals, talented artisans and award winning vineyards, there really is something for everyone, no matter what your interests.

The Denison Canal is a man-made canal located at Dunalley which opened for use in 1905 and takes its name from former Governor William Denison. The canal was built to shorten the fishing and trade routes between the East Coast of Tasmania and Hobart and to avoid the often treacherous passage around Tasman Island. For more information about Dunalley and the Canal, look out for the tourist information shelter on the Arthur Highway on the banks of the Canal. 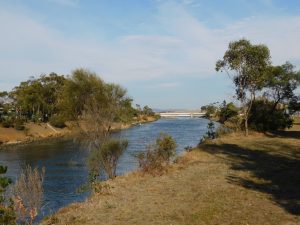 A scenic gravel walkway winds along the Canal at Dunalley. The walkways links up the popular Canal area with Imlay Street Park and provides lovely views along the Canal and into nearby Blackman Bay. There are public toilets available at both ends of the walkway along with electric barbecues and picnic tables at the Canal end. 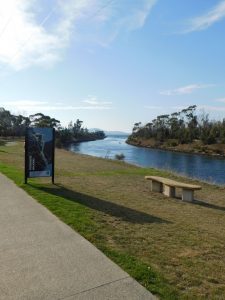 There are many fantastic parks and reserves around our Municipality. The majority of these have received significant upgrades over the past few years and have equipment that is sure to delight children of all ages. 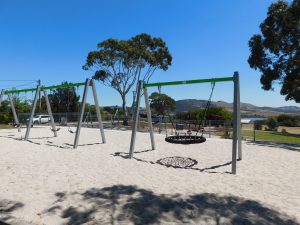 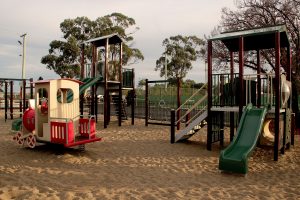 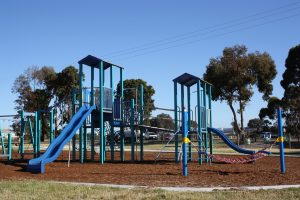 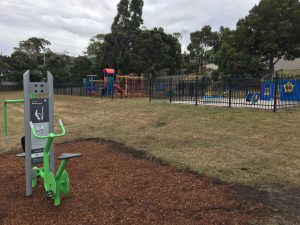 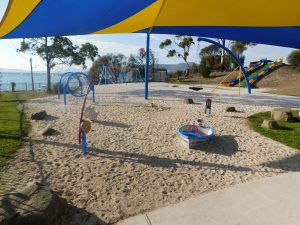 There are skate parks and bike tracks located in Sorell, Dodges Ferry, Primrose Sands and Dunalley.

For a full listing of the locations of our parks and reserves please see our Parks and Beaches Guide.

Spectacle Head is the home of a spectacular whale watching area. Forming part of the Whale Trail along Tasmania’s East Coast, there are interpretation signs describing the migration of Humpback, Killer and Southern Right whales, seats and a wonderful mosaic whale sculpture. 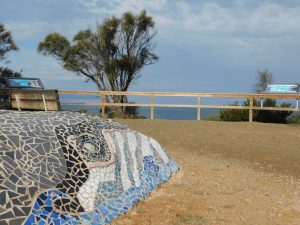 Lewisham, Dodges Ferry, Carlton and Primrose Sands makes up our Southern Beaches. The area is growing in popularity due to the wonderful relaxed beachside lifestyle it provides.

The Southern Beaches are a string of golden sand beaches scattered along the coast teamed with the pristine waters of Frederick Henry Bay.

Park Beach continues to be a popular surfing spot and it’s a perfect spot to take a scenic beach walk. 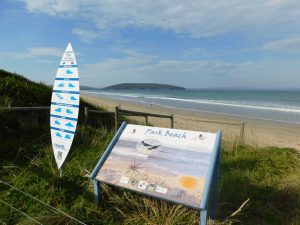 Pittwater – Orielton Lagoon is a wetland of international significance, recognised as both a Tasmanian Nature Reserve and an international Ramsar site.

The Lagoon is a prominent area for migratory birds, with 27 of the bird species found in the area listed under Australia’s international migratory bird conservation agreements. Birds from as far away as Siberia visit the area over the summer months, with some flying as far as 10,000 kilometres non-stop to reach us. It is the southernmost major summer feeding ground for waterbirds in Australia, and both local and migratory waterbirds breed within the site.

It is also an important estuarine ecosystem for marine life, and commercial ventures such as oyster farming. The area is an important shark nursery for both gummy and school shark, is home to the rare live-bearing seastar Parvulastra vivpara and supports some of the most significant salt marshes in Tasmania. These saltmarshes and surrounds are home to threatened plants such as lemon beauty heads, new holland daisies, yellow sea lavender and silky wilsonia.

Wetlands are among the Earth’s most significant life support systems and provide shelter and food for many aquatic plants and animals. The water quality of the wetland and the animals and plants that depend upon it are at risk from contaminates from storm-water runoff from homes and roads. Shorebirds are under threat from loss of coastal vegetation and disturbance from people, dogs and vehicles. Eggs and chicks of shorebirds are at risk of predation from dogs and cats and from trampling by people or crushing from bikes and vehicles. If parent birds are disturbed and leave their nest, their eggs or chicks will die from heat exposure in a very short time. The local community is working with state and local government as well as non-government agencies to improve the condition of the area and ensure its longevity. 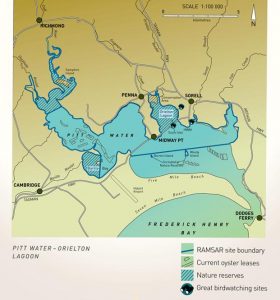 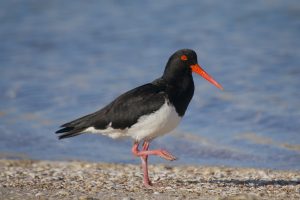 Located on the East Coast between Orford and Copping the Wielangta Forest Drive provides an interesting alternative route between the East Coast and the Tasman Peninsula.

Each end of the drive has an information bay to show the lookouts, picnic areas and stops along the way. Interpretation signs help visitors understand not only the history of the area but also how the forests are being managed today, while the reserves provide towering blue gums and pockets of rainforests to delight the senses.

There is also a 3 hour return walk that passes remnants of Wielangta, a once thriving sawmill town. The track follows the route of an abandoned tramway to the site of an old township known as Wielangta settlement.

Marion Bay Lookout provides a lovely view over the forests and out to the ocean over Marion Bay. There is a perfect spot for a picnic with some sheltered areas. 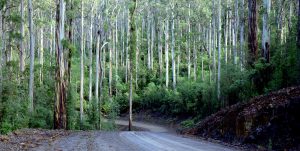 No matter what your tastes, you are sure to find something to please in our Municipality!

Dunalley is a seafood lover’s paradise with cafes and fish punts offering the best the local waterways have to offer.

Redline’s timetables can be found here

Tassielink’s timetables can be found here

Let us know if you liked the post. That’s the only way we can improve.